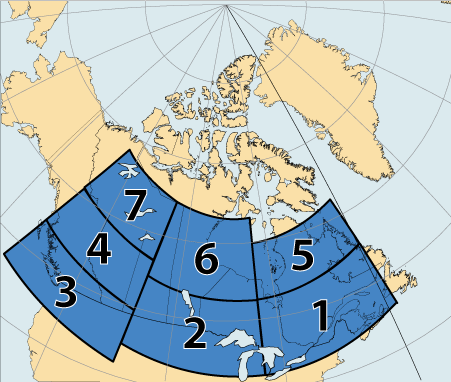 The Reports for the several geographic regions are derived from actual measurements made at magnetic observatories situated in each of the regions. In each case, data are telemetered from the observatory to headquarters in Ottawa, where the data are processed to produce a Kr index to characterize the level of magnetic disturbance measured during the past hour.

For qualitative comparison, the words describing the activity levels used in other forecast formats in this web site are included. Colours in the display panels change according to the level of the magnetic activity and Kr index, ranging from green, through yellow, amber, orange, to red.

The Forecasts are provided as summaries of the expected activity during the next 3 hours and during the following 3 hours, for each of the regions. Again, for ease of comparison with other sources of information, they are presented in terms of the Kr index. The forecasts are updated every fifteen minutes. The words describing the activity levels and the panel colour scheme used for the Status Reports also apply to the Forecast panels. When appropriate, Major Storm Watches are issued, indicating that conditions are such that Major Storm activity could occur during the time interval. When a watch is in effect, the upper part of the appropriate panel is coloured purple, and a Storm Watch message appears below the Forecast panels.

The Kr index is approximately equivalent to the local K index, but whereas the true K index is not routinely available until the day after data are measured (and then only for three observatories), the Kr index is available almost immediately. The two indices can differ slightly at low levels of activity but are not significantly different at high levels of activity. There are nine levels in the Kr index, as in the K index. Whereas the K index is defined over an interval of 3 hours, the Kr index is defined over an interval of 1 hour. It is derived from the running hourly range computed from the incoming observatory data, and is equivalenced to the K scale.

Report a problem on this page